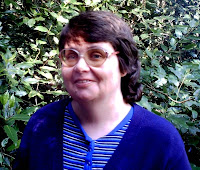 You can find the full call to submissions here:
Posted by Gill James at 18:35