Our Books for Children

Wilma’s efforts often end in disaster. Her spells come out all wrong. The other witches laugh at her. She has to watch them performing fantastic tricks. However, one spell that goes wrong has surprising consequences and Wilma gains a valuable ally.
Philippa Rae's delightful children's story is enriched by a series of colourful illustrations by artist Ashleigh James.

A Most Amazing Zoo

What happens when the Queen visits Zedgate Zoo? Well she meets a lot of amazing animals and finds out a lot of amazing facts about them.
This delightful story is told through a series of colourful and entertaining pictures and a lively text. There is plenty of extra story in the pictures for the child who has the book read to them, and the text is of an appropriate language level for the emergent reader.

Who will Be My Friend 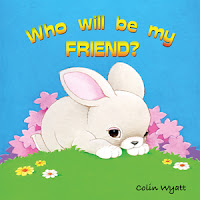 Who Will Be My Friend?' is a story about friendship, aimed at children approximately three to eight years of age. It features a  Baby Bunny who is lonely and is looking for a friend to play with.  Although the bunny meets lots of other animals, because of their differences, they give him reasons why they can't become his friend.  Finally however, Baby Bunny does succeed and finds a friend to play with and is never lonely again.