The Schellberg Cycle comes to Chapeltown 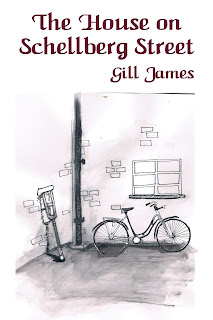 The House on Schellberg Street  was first published by Crooked Cat in 2014. It has now gone out of print and has been taken over by Chapeltown. Chapeltown will  also publish the other books in the next few years.

This is the first novel in a cycle of stories set in mainly the 1940s and having strong links to the Holocaust and ordinary lives in Nazi Germany. There is plenty of information, too, about other decades in the 20th and even the 19th century in the stories, and about life in England and at the front in both world wars.

Gill James used a sabbatical from the University of Salford in 2011 to conduct much of the research needed for this project. It was a very fruitful sabbatical: it has led to at least five novels, several academic papers and a whole project which includes workshops in schools.

This new edition has a new cover, though it is in the style of the other one. The glossary has been extended.  The blurb more explicitly invites engagement with those interested in the 1940s, World War II and the Holocaust. The whole text has also been lightly reedited. Crooked Cat had done a very good job but even in three years language and fashions in writing change. We made just a few little tweaks.

Get your copy of the second edition here: